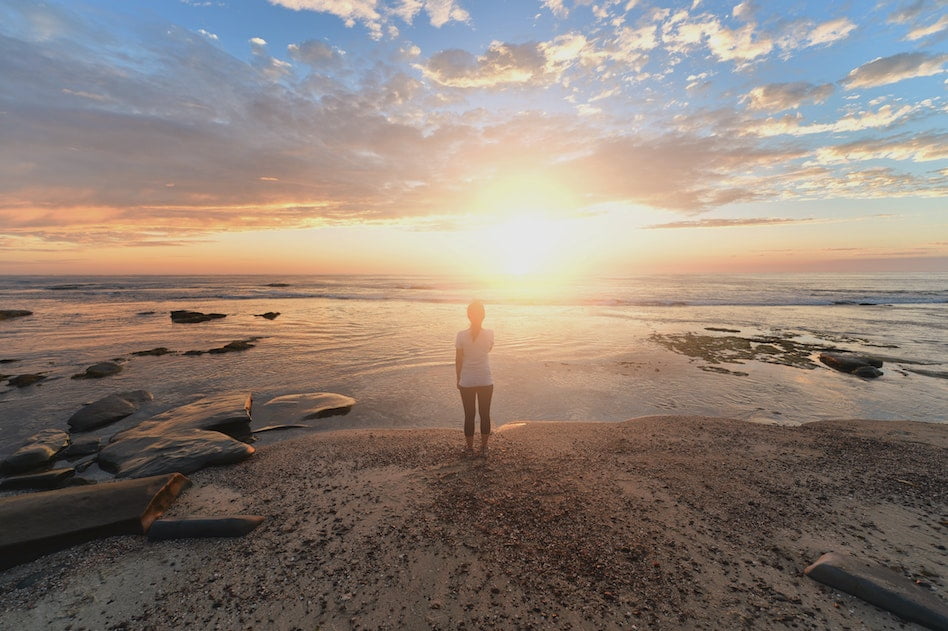 The Imaginal Realm appears to be infinite – or at least as large as the Universe. (I secretly believe that the Universe is expanding because we (and others) keep imagining new things.)  The term “Imaginal Realm” was coined by Henry Corbin, a French scholar of Islamic studies in the mid-1900s. Corbin distinguished the imaginal realm from the imaginary realm.

What is imaginary is made up, but what is imaginal has an actual reality in another dimension. Carl Jung referred to it as the “Collective Unconscious.”  You can play in the imaginal realm consciously, through guided imagery (which we use in the Clear Beliefs Method), and you can allow it to enter you through your dreams, prayers, meditation, and idle meanderings.

Intuition and imagination are connected, operating as another sense, beyond the 5 senses – another set of eyes you can use to see into the world more deeply.

Here’s a place to start:  Ask the question, “What wants to come into being through me?”  Allow yourself to relax back. Open up to the infinite potential of the universe.  Receive whatever comes, in any form it comes – images, words, sounds, memories, or future possibilities. This is often called Magic – operating in the space between worlds. It is closely linked to the mysterious. True creativity happens at the edges of the unknown.

Imagination is where the “I” becomes a “mage,” a magician – one who creates a new world out of the raw materials of this world. The word magi referred originally to a priest class in ancient Persian. The Magi acted as mediators between the spirit world and the physical world of manifestation. They were the magicians – the makers.

In the Tarot, the Magician stands near his four substances on the altar: air, earth, fire, and water. His hand is upraised to the heavens (where imagination could be said to come from), and with the help of Spirit, he is able to make a new reality. In the imaginal realm, you work with only one substance – consciousness itself.  In the physical realm, you work with earth, water, fire and air – space, time, energy and matter.

The root of the word “make” is the Old English macian, which means to fit or match. When we create our reality, we forge what is around us to match our dreams. It all begins in the Imaginal Realm.

Anything is possible In the Imaginal Realm – there are no limitations, other than those you self-impose.  Test this theory right now.  Imagine an upside-down giraffe floating above a kiddie pool.  There. You just created something that doesn’t exist, and never existed, and now it does – inside your own imagination.  You’ve had a real experience of an imaginal object.

The physical world is made of limitations. A stone remains a stone, although it can be shaped.  Water remains water, although it can take different forms. Stones and water do not suddenly become each other. One of my great teachers, Werner Gerhard, told of his great realization one day: “Rocks are hard. Water is wet. Mother is Mother.”  People usually stay the same ­– unless they decide to change.

Thought, imagination, and intention can create internal experiences that are as real as physical world experiences.  In fact, experience itself may be located in the Imaginal Realm.

When you create a new thought, or intention, it doesn’t have to follow any known laws of physics or biology, including energy, matter, or time. It isn’t there one moment, and the next moment it is there. When you let it go, it disappears from your experience (or does it go somewhere else?).

Creating in the physical universe is much different. You have to bring the thought or idea down into the world of form, step by step. You begin with an idea, or an imagined scenario of what’s possible. Then you need to work within the laws of physics, and take actions in the world. You use your body, will, energy, and time, to create what you imagined.

Note that every single thing in the human-made world started off as an idea in someone’s imagination!

As soon as you begin to move an idea into the physical world, you discover challenges and obstacles to overcome.  We call this resistance, or friction – a product of the laws of physics.  We expect resistance in the real world, and we deal with it as a fact of life.  If there were no resistance or friction, there could be no creation. Everything would just slip and slide against everything else.

We can’t create matter, because it’s already been created.  To create in the physical universe, you take your idea, and begin assembling raw materials that already exist. You cut and shape them to match your imagination. You manipulate them, decorate them, and move them into place. This is how we create art, architecture, machines, and technology.

In the imaginal realm, there are no limitations, and no rules.  You have complete freedom to create something out of nothing.  You can imagine anything, without concerning yourself with internal or external resistance, or the laws of physics, chemistry, or biology.  This power to CREATE is the power a God has as a Creator. “God said, ‘Let there be light… and there was light.’”

The act of creative visualization is itself a kind of magic. When you visualize something clearly, it’s more likely to happen, because you are instructing your subconscious mind to draw it toward you. This is known as the Law of Attraction.

Visualization acts as a kind of strange attractor – a term from chaos theory meaning a hidden force that influences the formation of patterns out of the chaos.  It’s like a magnet beneath a piece of paper which shapes random iron filings into an organized form.  You can’t see the magnet, but you can see the effects of the magnetic field.

The images we hold in our minds similarly influence the formation of reality. They have a kind of magnetic force that acts upon the chaotic, underdetermined world of potential. We  call patterns into existence with our thoughts.  Unfortunately, visualization alone is not a reliable source of creation. It works sometimes, and not others. It’s only one step along the path of manifestation.

When you use your will, you can gain control over your attention, and the pictures you hold in your mind.  When your old limiting and negative beliefs are held in your mind, you are creating that reality.  An internal image of your body as overweight helps create that reality. When you focus on your debt, you create more debt.  If you focus repeatedly on an illness, pain, or problem, you usually get more of the same.

How can you avoid focusing on negative realities and obstacles?

First, become aware of them.  Second, name them. Write them down. Honor them as having a purpose in your life.

Then delete them, one by one.  As you clear your beliefs, your potential for creation blossoms. It goes exponential.  You free yourself to serve your greater vision. (This is what we do to help you in the Clear Your Beliefs coaching program.)

Give your inner vision more of your precious attention than the obstacles you face, or the negative views you have. Obstacles and feelings are just part of the experiential landscape. Use your imagination, and clear your beliefs. This will lead you directly to what you imagine for your future.