The Power of Beliefs 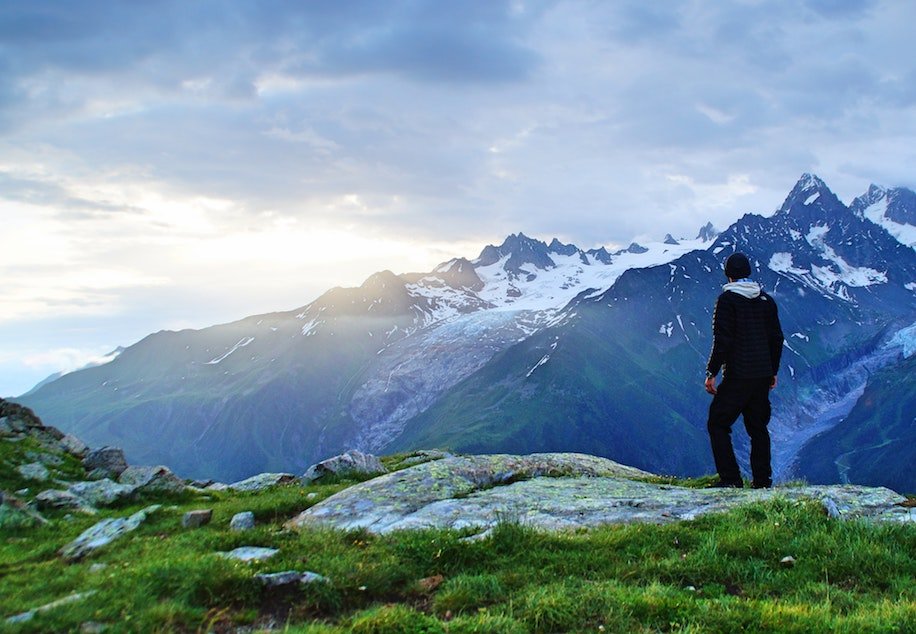 My friend Michael, an expert rock climber, told me he wanted to do something special for my 50th birthday – take me up a famous rock climbing wall, Cathedral Peak, in Yosemite Valley.

“Sure!” I replied. I some rock climbing experience in college, and 4 years earlier, Michael had taken me climbing in Yosemite. I loved climbing. I was ready for an adventure!

We drove to Tuolomne Meadows in the dark of night, arriving at 5:30 a.m. to get started “before the crowds arrived.” I was surprised to see scores of people already packing up and starting up the various hiking trails that begin on the valley floor.

Michael gave me a 25-pound pack that he had put together for me. This was just a day hike, he said. No problem! He pointed to a distant white peak, saying “That’s where we’re headed.” It looked like a tiny white thumb sticking out of the very top of the mountain. Probably a short hike. No problem!  Let’s go!  We started up the hill, and continued hiking – seriously uphill – for the next two and a half hours.

I wasn’t in great physical shape, so by the end of that jaunt, I was pretty tired. The scenery was stunning, however, so my attitude was positive. We stopped, finally, and I leaned against a sheer granite cliff to rest. Michael pointed upward, and said, lightly, “This is it. Get ready.”

I looked up, and up, and further up, looking at a sheer white wall that was nearly vertical, 2,000 feet from the base, where we were standing, to its tip.

“You’ve got to be kidding!” I said, hoping he would tell me that he was joking. When he began unpacking ropes and carabineers, I knew he was serious.  Maybe I had said, “No problem!” a little too soon.  My stomach was queasy.

I put on my climbing shoes, which squeezed my feet like a vice, and adjusted my pack, my rope  harness, and my attitude. “I believe in Michael,” I thought to myself, “and he believes in my ability to get up this thing. So I’m sure I’ll be okay.”

Michael climbed first, and my job was to let out the rope as he scampered up what looked like a vertical wall with nothing to hold onto. He moved fast, like a flesh-colored Spiderman. After the rope was almost out, he secured himself and yelled down to me, “Okay, on belay! Climb!”

I braced myself, grabbed small knobs of granite, and found tiny cracks that would hold the tips of my toes. Step by step, handhold by handhold, I made my way straight up the wall.

About 30 feet off the ground, I looked down. I was suspended in mid-air, holding on to tiny  rock knobs with my fingertips and toes.  I then looked up, and realized that I had 1,970 feet to go. My legs began to shake. Fear rose like mercury in a hot thermometer. I yelled up to Michael what was foremost in my mind: “Michael! This is WAY BEYOND MY CAPABILITIES!”

I had taught Michael about changing beliefs in one of my classes. Calmly, he yelled down to me, “That belief is not going to get you up here!”

Damn! He was right! That limiting belief would never get me up this wall.

In fact, with a belief like that, anything could stop me. Everything would stop me!

I had to change my belief.

Using my belief-change technology, the Clear Beliefs Process, I pulled that belief out of my consciousness, and disintegrated it.  That created some space.  Ahhh… take a breath.  Now: what belief would support me in getting up this ridiculous wall?  I created a new belief: “This is well within my capabilities!”

I instantly felt better, more competent.  I could see lots of handholds and footholds that were invisible before.  I began to climb, easily, comfortably.  It all seemed kind of normal. Hey! I’m doing it!  I finally reached Michael, and rested while he climbed the next pitch. Then it was my turn again.  Once again, I clambered up the wall like it was second nature.

I will not try to convince you that the rest of the climb was easy.  It took five more hours to get to the top. At one point, my fingers simply stopped working. I was exhausted, and I couldn’t grip anything.  I figured that a helicopter would have to pluck me off the wall to free me from my predicament.  Michael was patient as I went through every possible emotion, from terror to giving up to courage and back to terror. He patiently instructed me, cajoled me, and sometimes pushed me to press beyond my physical limits.

After all of those exhausting hours of hiking and climbing and pushing myself beyond anything I had ever done before, I sat with Michael atop a narrow knob of granite 2,000 feet above the ground, looking out at a gorgeous 360-degree view of Yosemite Valley.

I was absolutely astounded that I had made it to the top. There were many times that day that I was sure I couldn’t make it. But one thing was now certain: this was within my capabilities.

And sitting on top of the world, I realized how powerful beliefs are the achievement of any goal.